You are here: Home / Marine Aquariums / Should A Novice Start A Saltwater Aquarium?

For somebody new to the hobby, the visual appeal of a marine aquarium with brightly coloured fish and interestingly shaped corals may be powerfully attractive. However, the costs associated with keeping a marine aquarium, particularly a reef one, make even basic mistakes a costly issue.

While some experts defend that a well managed marine aquarium is not necessarily more difficult to keep than a tropical one, the truth is that fish on a marine tank are much more expensive than freshwater fish. Coral and live rock are other living organisms that will die and need to be replaced at a cost if there is an ammonia spike or a pH imbalance.

What You Need To Learn To Start a Saltwater Aquarium

The learning process of a marine tank is also more complex than that of a freshwater tank. Terms such as skimmers, hygroscopes or specialist lighting for corals will become part of your every day vocabulary. You will need a deep understanding of water chemistry and water testing, and get used to frequent water changes and maintenance. By comparison, a cycled freshwater aquarium is much easier to manage.

In both cases, getting a few good reference books can make the life of a novice aquarist much easier. While internet forums and websites are great, it will take a while before you can distinguish at a glance between well meaning but wrong advice from another newbie, and the words of an experienced fish keeper. This article goes more in-depth about what hardware you’ll need to set up a saltwater aquarium.

Why Are Saltwater Fish So Sensitive To Changes?

Exposure to change is the way Nature has made some fish more resilient to change than others. Imagine a little guppy, living in a stream in the tropics. Rain, weather changes, a large animal disturbing the mud, his environment is changing all the time. The water conditions and temperature will change constantly. In order to thrive, tropical fish have learn to adapt.

By comparison, a clown fish living in a reef enjoys a pretty safe environment, from the point of view of water chemistry. Temperature on the ocean remains more or less stable, water chemistry is not affected by rain and the chemical composition of the water is similar across a large area. The evolutionary efforts of marine fish have focused on dealing with other threats (which won’t be found in an aquarium) but not that of a few weeks of hurried maintenance causing a change in pH of half a point, which a tropical fish would probably not even notice. Just to put things in perspective, rising the temperature of the oceans by 1C would kill 16% of coral reefs in the world! A platy on a freshwater aquarium wouldn’t even notice.

This makes saltwater fish less likely to deal with an aquarium where the lack of water volume means small changes to water chemistry, such as a drop in pH, can’t be buffered like in the ocean. It is not an excuse to mistreat your freshwater fish, who should be given as good an environment as possible, but while tropical fish may look lethargic and less brightly coloured in a bad environment, your marine fish may quickly go belly up.

Costs of a Marine Aquarium

If you are a total novice to the aquarium hobby, keeping a marine aquarium may be a pretty large investment. Not only will you need a tank that is suitable for marine setups, but you will also need a quarantine tank and regular amounts of either RO water or saltwater which you can purchase from your local fish store. Marine setups also require specialist equipment and biological filters, whereas freshwater tanks only require a good filter and a heater.

With saltwater fish being upwards of $20 each the last thing you want is a sick fish or bad water chemistry to kill half of your aquarium population. On the other hand, freshwater fish such as guppies are very cheap, colourful and will breed by themselves as long as the aquarium conditions are ok. While a quarantine tank is still a good idea, not having one feels less like than playing Russian roulette when you haven’t invested so much money in fish stock.

So Marine Aquariums For Novices Are a No-No?

Now, if you enter the marine aquarium world with open eyes, knowing that you will need to learn a fair bit, spend some money purchasing good quality, reliable equipment and religiously taking care of your fish, a marine aquarium can be downright gorgeous and very rewarding. It can also be fun if you love a challenge, and if you have the funds to get a relatively large aquarium the water chemistry will be easier to keep stable.

If you just want to test the waters (pun intended) and see if keeping fish is for you, a freshwater tank will be less visually impressible but equally fun to take care off, and a good selection of novice friendly freshwater fish can be colourful and very lively. And you will be happy to know that freshwater fish are more able to cope with novice mistakes and environmental changes, which are quite common when you just got your first tank.

Tetra Whisper Easy to Use Air Pump for Aquariums... $5.00
SaleBestseller No. 3 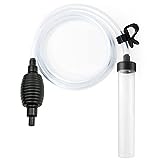 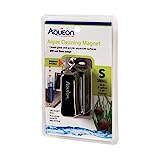